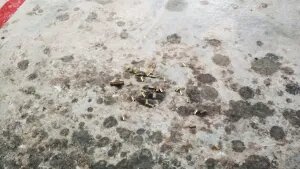 (Castellano)
WE DENOUNCE THE PARAMILITARY AGGRESSIONS OF THE ORCAO AGAINST THE ZAPATISTA COMMUNITY OF MOISES GANDHI, CHIAPAS, MEXICO.
Since the public appearance of the EZLN in January 1994, the Mexican government at its three levels (federal, state and municipal) has promoted, organized, financed and encouraged different paramilitary groups to attack the Zapatista civilian population.
In this context, the community of Moisés Gandhi, located in the Cuxuljá crossing, autonomous municipality of Lucio Cabañas, (of the official municipality of Ocosingo) has recently suffered several attacks by the paramilitary group ORCAO (Organization of Coffee Growers of Ocosingo).
– On August 22, ORCAO attacked with large caliber weapons, burned and looted the coffee warehouses of the «Nuevo Amanecer del Arcoiris» Trade Center, located at the Cuxuljá crossroads.
– On November 8, ORCAO kidnapped Félix López Hernández, a Zapatista support base in the community of Moisés Gandhi, who was beaten, tied up and locked up without food or water until November 11, when he was released.
– On Monday, January 18, 2021, ORCAO fired on the community of Moisés Gandhi. The attack began at 1530 hrs (Mexico time) and until 1800 hrs. shots were fired at the houses of the community. 170 shots of large calibers and 80 of small calibers.
– On Wednesday, January 20, 2021, at 16:00 hrs, another armed attack against the community, with large and small calibers. At 10:30 p.m., another attack with firearms against the community.
– On Thursday, January 21, 2021, new shooting attacks against the houses of the community of Moisés Gandhi. First at 00:30 hours and later from 02:10 hours until 02:55 hours.
The number of attackers is estimated to be at least 20 people. All belong to the paramilitary organization ORCAO from the communities of San Antonio, Cuxuljá, San Francisco and 7 de febrero. (All information can be consulted at the Fray Bartolomé de las Casa Human Rights Center, Chiapas, Mexico).
For all of the above reasons, we denounce the paramilitary escalation against the Zapatista communities, as well as the complicity of the federal, state and municipal governments in it.
Whatever they say, whatever they declare, whatever documents they sign, the bad governments are financing, promoting and supporting the attacks of paramilitary groups, such as ORCAO, against the civilian population. They are criminals, even if they think they do not dirty their hands with the blood of men, women, children and elderly people who live peacefully in all those communities attacked by the paramilitaries.
LONG LIVE THE STRUGGLE FOR THE LIFE OF THE ZAPATISTA COMMUNITIES! STOP THE PARAMILITARY ATTACKS! STOP THE DEATH SOWN BY THE THREE BRANCHES OF GOVERNMENT