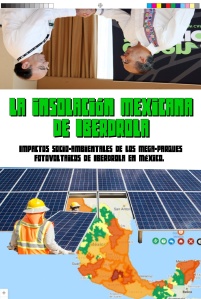 Today we present the report “Iberdrola’s Mexican insolation. Socio-environmental impacts of Iberdrola’s mega-photovoltaic parks in Mexico” (only in Spanish), produced in the Basque Country by A Planeta together with IberTrolas, organizations that have been following Iberdrola in the place where its headquarters are located, and the Mexican organization Movimiento Regional para la Defensa del Agua y de la Tierra (MODAT), attached to the Coordinadora Nacional Plan de Ayala – Movimiento Nacional (CN-PAMN) of Mexico.

As the title indicates, the report analyzes Iberdrola’s mega-photovoltaic parks in Mexico, more especificly the one which wants to build in the community of Ocotepec, state of Puebla (Mexico).

This case replicates the same procedure as those that occurred in the isthmus of Tehuantepec, in the Mexican state of Oaxaca, where different energy companies implemented different wind farms. The relationship between this new project and those already underway is not only that both are located in Mexico and that the energy involved is supposedly renewable, but also because once again it takes advantage of the form of ejidal land ownership, a form that is characteristic of Mexico and included in its constitution. The ejido is a form of collective, community property, which is a recognition of the pre-colonial forms of land use, and which was a conquest of the Mexican revolution of 1910. The community, through its management bodies (ejido) is the one that manages that land.

Now, it can happen, as is the case, that a person with political capacity arrogates and abuses his or her capacities to grant the use of the land to an individual or company, without consulting the community, and therefore without knowing their acceptance of the decision, or as is also the case, being in disagreement. These are individuals who have managed to be elected in the electoral system but who skip the communal decision-making processes, either because of arrogance or because of corruption. And in the same way, it can be that a transnational company tries to abuse and obtain rights in the same way, ignoring the traditions and even the law.

In this way, moreover, this new energy project of Iberdrola in Mexico also has in common with the cases of the wind farms in Oaxaca, the fact that it does not comply with one of the indispensable principles of any projected infrastructure such as that of informing the affected community, and consulting them and allowing them to decide on the project.

Furthermore, the report denounces something that has been a common practice of Iberdrola, which is to promote renewable energy projects to obtain an image return, in such a way that it has a propagandist effect on these projects, ignoring others. For years Iberdrola has abused the use of renewable energy from adding it to its own name (Iberdrola Renovables), to repetitive and misleading advertising because it was aware that this was profitable, hiding the true origin of its energy. Or, paradoxically, while it presented itself as promoter of renwable energy, Iberdrola was the main obstruction to some of them, such as solar energy. Paradoxically, the same energy that it now claims to want to promote in Spain and in Mexico. Material obstruction, since the law of PP corresponds to it, which favors the great energetic ones and other energies in detriment of the solar one.

The same happens in Mexico, where Iberdrola has 5,546 MW of combined cycle power, so it uses gas in this production. Gas contains mainly methane, which is the gas with the greatest greenhouse effect, and therefore one of the main causes of climate change in its entire process, from its extraction to its burning in electricity production, in which, due to the very nature of gas, in addition to the gases resulting from burning, constant gas leaks occur. Meanwhile, the energy that Iberdrola’s bases its image on is renewable energy, when, for example, the wind farms in Oaxaca do not even add 367 MW, and this solar project will only have 200 MW. However, in both cases, despite the production being renewable, its effect on space, the ecosystem and the community is huge. Not to mention the technology to be used, in this case the solar, which as the report also explains is not exempt from impacts. The first obvious conclusion of the report is that being a renewable energy does not mean being fair, nor democratic, nor desirable.

Because it is also not desirable for the community because it will not even benefit from that electricity, so in addition to suffering the effects, they will continue to be excluded from a good that should be basic. And this is because, as is the case with the wind farms in Oaxaca, the electricity from these plants has already been allocated, and it is not the community or society in general but another company. In this case, the energy will be allocated to a brewery and a farm. This way Iberdrola also guarantees to sell that energy. But it is also the case that Iberdrola itself, in Mexico, is guaranteed to be bought all its produced energy by the government. The company that awards it the contract needs energy, but in this way it can also obtain income from the supposedly renewable origin of the electricity used in its product. Iberdrola is already selling this project too on its own benefit, portraying it as its largest solar park in Mexico. The Mexican government itself will do more of the same.

But equally, Iberdrola not only benefits from the sale of this electricity and the associated publicity, but also from climate policies such as Carbon Credits, Clean Development Mechanisms and subsidies for renewables, so we have a rounded business. Meanwhile, Iberdrola pays less than 10 cents of a euro (2.5 pesos) for the square meter of land on which it erects the solar panels, which the ejidatarios understand as an abuse.

At the same time, Iberdrola takes away 700 hectares of land that are used as pasture and crops, provoking the community to loose production capacity and sustainability. Another aspect that worries the community is that in order to guarantee the perfect going of the photovoltaic panels, the company must prevent dust from rising and covering them. To do so, the solution is to irrigate that entire area constantly, which requires thousands of liters of water which is not abundant in the area. The community predicts such a huge use of water will condition its domestic, agricultural and livestock access to the precious liquid.

Iberdrola, from this as from other projects, does not extract or produce any resource or product there, but just electricity that it converts into money. It does not export anything to its parent company, except money. The economic transfer under these capitalist conditions can only be described as colonialism. Energy colonialism. These days of linguistic conflict (because otherwise they seem to maintain their affinity) between the president of Mexico AMLO (López Obrador) and the government and kingdom of Spain, because of the legacy of Spanish colonization, it is good to remember that this colonization did not cease with independence.

The form of electricity production is also an aspect to be taken into account, because although the origin of this can be considered as renewable (solar), the form, intensified in terms of land, infrastructure and technology, as well as long distance from where it is going to be consumed, entails the need for electrical lines (infrastructure, occupation of territory, electromagnetic fields, etc) and loss of much energy in its transport. The way forward and what the community of Ocotepec would need would be a form of local generation so they would be able to produce and consume directly. And above all, the community would need this to be owned and managed by the people of the community themselves. What Iberdrola proposes is therefore the opposite.

Meanwhile, in that region we find genuine proposals such as, for instance, those offered by the renewable cooperative Onergía. This one does offer that possibility to many communities in the same state of Puebla to access a basic resource like electricity, to develop a fair alternative energy model, eliminating from the equation the fact that third parties (transnational companies) can speculate with that energy for their own benefit, for the benefit of an elite that, in their case, with the exception of the Mexican directors (including before Calderon, and Georgina Kessel), the main ones are in another country many kilometers away from there, in Spain.

With this report we want to denounce again the manipulation and hypocrisy of Iberdrola weeks after another energy conflict and also led by Spanish companies (Elecnor , Abengoa, and Enagas) in the Integral Project Morelos. With this we also want to add this case to the others to complete the situation of energy and economic plundering of the Ibex-35 in Mexico and the greenwashing.

See also article on the report in Avispa Midia (Mexico): 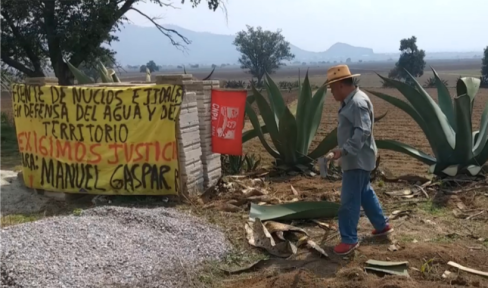